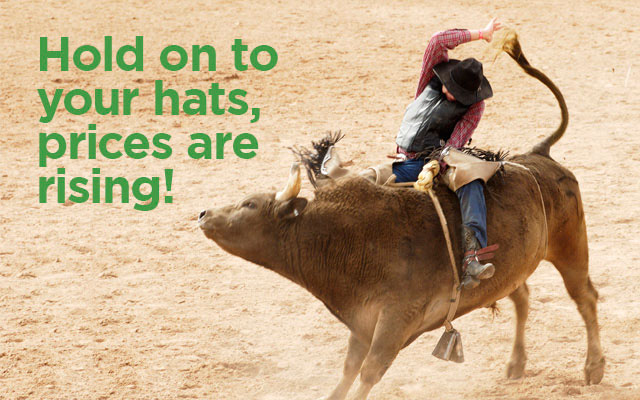 Can you believe it? In his recent Press Club address, again, we have a PM spruiking ‘Soil Organic Carbon’ and its benefits

While “soil organic carbon increase” did not entirely seem to roll off his tongue naturally, he is committed!

AND Minister Taylor has Soil Carbon Sampling costs in his sight. We have the aspirational target of reducing Soil Sampling costs to $3/ha. As we move to an improved Soil Carbon method that will be financially viable for many. Other Tree Growing methods are also receiving much needed attention to improve their viability.

We need to reduce the complexity and increase the abatement potential.

One other way of doing this, of course, is to INCREASE THE PRICE OF CARBON

So, it was with great glee that we saw prices of ‘Secondary Market’ ACCUs rise to $17.25 for the sale of 25,000 tonnes last week. It is unclear for which activities these are – Tree Planting, forest growth, etc. Unlikely to be Soil Carbon at the moment as projects are only in the early stages of their new ‘carbon-storing’ activities. Doesn’t matter, they were ACCUs.

This is an increase of several dollars even from the last auction which had an average price of around $16. Only in November of last year!

Remember, there are many millions of tonnes contracted to the Government under ‘Carbon Abatement Contracts’ for future delivery. This means a smaller pool of credits is available for the ‘non-Government’ or Secondary Market, which is assisting to drive these prices up. Smaller volumes are available.

Reputex (a respected company that watches these markets) expects this interest to continue pushing ACCU prices up throughout the year:

“We forecast short to medium-term price increases, with our FY21 price expectations around A$18/t on the back of growing expectations for increased target ambition, and demand from voluntary and state government buyers. As noted in our earlier outlooks, this should see carbon offset prices exceed historic levels over FY21,” the firm said.

“Longer term, we continue to forecast higher ACCU prices as Australia strengthens its emissions reduction ambition under the Paris Agreement. Net zero emissions is a key driver of our long-term offset price expectations, with the scale and timing of Australia’s net zero emissions target a key watch for market stakeholders.”

So, let’s get some credits for this market going!
Contact me for ways to get involved:

Having spoken about the price increases, we also have some CHALLENGES (of course).

The hidden cost of a low Climate Change Target

It is sometimes claimed that Australia’s Climate Change Targets are too low. We are only promising to decrease emissions by 26-28 % on 2005 levels. Many believe this is too low to reach the Paris Target of keeping temperatures to below a 1.5 degree increase. Including International countries looking for higher targets from their trading partners.

So while this is legal at the moment, if we are seen worldwide to be NOT doing our fair share, here is a taste of what could happen:

Bloomberg reports that Boris Johnson is considering using the UK’s G7 presidency this year to try and forge an alliance on carbon border taxes. The outlet says that Johnson “wants to expand carbon pricing at home”, but “also wants to get G7 countries to discuss so-called carbon border adjustments – penalties on imported goods that are produced in countries with weaker climate laws, according to the people”. It adds: “The idea is to protect industries in countries that have higher carbon prices while prodding other regions to move ahead with similar climate action.

That is: we may well have a ‘carbon tariff’ put on our export goods. Not just by the UK either – China and the USA are looking for higher targets from the likes of Australia as well.

Far better to have a larger target, let Farmers (and others) do the work of achieving the reductions, and earn an income, right?

Training
Need a refresher on the ‘rules’ of emissions? I have 3 recent webinars up – the best training you’ll get at the moment!

Watch the webinars
Previous Post 100% Australian Carbon Offsets purchased for carbon neutrality
Next Post Is this market the best thing since sliced bread?? 🍞 (or Vegemite?)