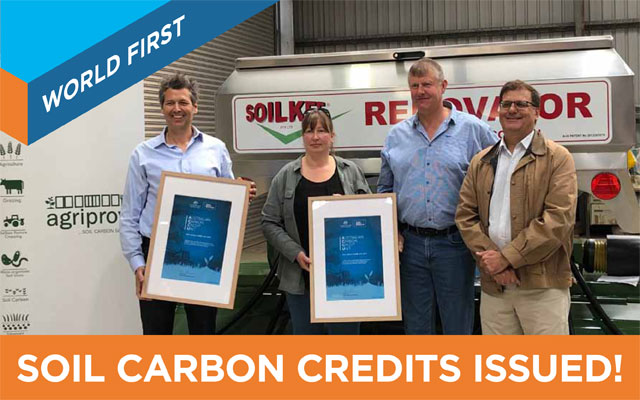 AND, they are AUSTRALIAN CARBON CREDIT UNITS (ACCU’S) HOORAY!

YES, in a classic ‘it won’t happen over night, but it will happen’, yesterday I had the privilege of attending, speaking at, and congratulating the team at the ceremony where the first Australian SOIL CARBON Credits were issued. These are also the first in the World. Not bad eh?

This project is being run under Version 1 of the Emissions Reduction Fund (ERF) approved ‘Sequestering Carbon in Soils in grazing systems method. All new soil Carbon Projects will need to be developed under Version 2. This is great news as all types of Farming can be included – Horticulture, Viticulture, Cropping, and mixed enterprises!

The Project Developer is Corporate Carbon – Now rebadged for Soil Carbon solutions as Agriprove, and Farmers Niels Olsen and his wife Marja.
Soil Coring by Adrianna Marchand of Bootstrap Environmental and Sampling Design and technical support by Ignatius Verbeek and team from Agri-x Holdings.
Don’t worry if you haven’t heard of these names – they will ALL be on hand at the National Carbon Farming Conference & Expo!

The ‘new’ activity was combining cultivation, mulching, aeration, and mixed species seeding to improve grazing systems in a cattle enterprise and build soil carbon.  They are using the Soil Kee system – and yes Soil Kee will be at the conference and be demonstrated at the Carbon Farming Field Trip as part of our event.

The princely amount of 406 credits were issued.

Yes, its small, but as we all know – sing it with me – From Little Things Big Things Grow.

In another World First yesterday Carbon Farmers of Australia bought 10 of these soil carbon credits at a price of $100 each.

Now THERE’S a price on Carbon!

CFA has always maintained that Soil Carbon credits are ‘gourmet’ credits due to their ability to assist in soil security and food security. They should not be priced as a commodity.

We trust this will inspire others to also make a stand. We are hatching a plan to ‘auction’ others at the conference…

Don’t miss out on early bird savings –
REGISTER NOW for the conference!

I have more speakers being unveiled next week.

Previous Post Back to the Future!
Next Post Welcome to the Brave New World… Beyond the Emissions Reduction Fund