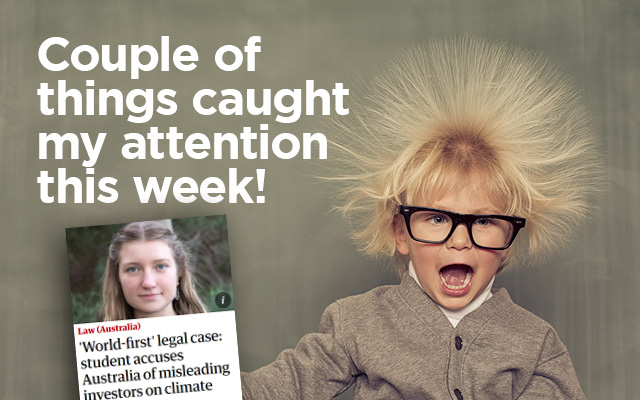 Yes, the ‘interesting times’ continue. I trust you are staying safe.

At least many farmers have had rain and having a good season. I did read that the canola is ripening two weeks early… that risks frost damage of course. Anything to do with Climate Change? Depends on who you ask…

Anyway, first I wanted to update you on the question:

Where will the demand for carbon credits come from?

In recent news Katta O’Donnell, 23, (a law student) has filed a legal claim against the Australian government over its failure to disclose the risks posed by climate change.

What a great ‘case study’ for her studies also! I hope she graduates soon so I can get her as my lawyer 😊

What does this mean?

Katta is alleging that the federal government has breached its legal duty to inform the investors of government bonds about the risk that climate change poses to their investments. Many super and pension funds hold such bonds. Have a read of the article to find out more.

If the government, let’s say, could show it was doing more to address climate change, it would mitigate this risk of being held responsible for lack of action – which could cost an awful lot of money if actions such as this are successful. So why not put the money into better climate change policy? Dare I say it… Carbon Farming policy. This could certainly lead to an increase in demand for carbon credits.

Further to that – guess which other companies could be held similarly responsible for their response to the known risk of climate change – OH, that would be any company which has shareholders. Are they too risking legal action?

See the Australian Institute of Company Directors article, and note in particular the paragraph below:

The Hutley Opinion found that courts would likely view climate change risks as “foreseeable business risks” and, as such, relevant to a director’s duty of care and diligence to the extent that those risks intersect with the interests of the company. Directors could face liability for breaching their duties if they cannot show they have adequately considered and responded to the risks of climate change on their business.

MY POINT IS… Hmmm, would company directors prefer to be sued for avoiding duty of care, or buy Carbon Credits?
…….

Gives me confidence that DEMAND for credits will only increase.

A sleeping giant for companies who are currently just sitting on these requirements.

In another good news story, the Carbon Farming for Soil Carbon Increase movement continues. A new project in India will help farmers increase their income as well as store carbon in their soil.

Now, these credits will not be ‘Paris compliant’ i.e. not tradeable to meet any Paris Agreement targets, but what this shows is how soil is gaining and gaining attention as the largest carbon sink under our control.

We will be sharing knowledge with this group as we move forward.

Here’s some more reading on the IPCC and their attitude to the soil. What we want to ensure is that FARMERS and their knowledge of their soils is at the centre of any soil carbon policies. Let them be involved in ALL meetings and policy decisions.

Download the guide
Previous Post IS THERE A PULSE? Breathing life back into Carbon Farming and Trade
Next Post New Chapter in the Soil Carbon Industry Begins